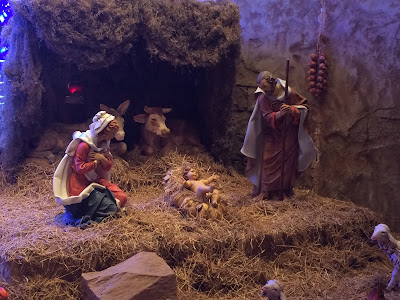 Adventus Domini ~ the coming of the Lord. One of the clearest signs for Advent is the classic wreath with four burning candles in the center, three purple, one pink. Seemingly simple, yet it states so much. The wreath itself is round and ornamental to comprise what makes a wreath, yet the shape of a circle can also represent the idea of eternity. A circle seems to go around continuously, hard to find a beginning and an end. While God is Who we shall adore for all eternity and He is the beginning and the end.

From the Catholic Catechism, "Eternity has no end. We can never have a proper conception of its duration, because we have nothing similar to eternity. Millions of ages are as nothing compared to eternity. If a bird were to carry away from the ocean one drop of water every thousand years, a time will come when it will have carried away the whole ocean. But that time is less than the shortest moment, compared to eternity."


So what does that mean for us? The idea of eternity emphasizes the importance of using well the time we are given on earth to prepare for the coming of the Lord. Not simply at Christmastime, but also His Second Coming, or rather what may more likely come sooner, His coming for us at our deaths. The green Advent wreath reminds us that such a coming is soon. The candles die down as each week passes, telling us that Christmas approaches, as also eternity approaches. Preparing for our own death should not be a morbid thought. It is simple really. An old maxim says, he who lives well shall die well.


Preparing for Christmas helps us to live well. Not by buying lots of gifts, or putting up endless decorations, although these are good too. But, rather to focus more fully on preparing our hearts for Christ's coming to each of us individually, that He may find a worthy dwelling place free from sin and abounding in virtues. For living well, means living fully for God. So let us all make an extra effort to be ready for Christ at His birth, that we may be prepared for Him at our deaths.