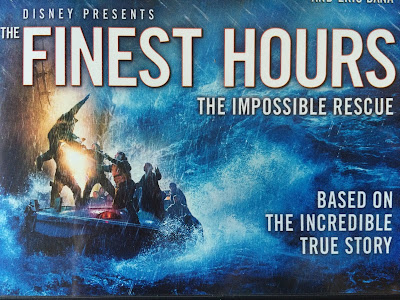 The Finest Hours is based on a true story taking place in the 1950s about the most daring coast guard rescue mission ever accomplished. Bernie Webber is sent on an impossible rescue in a horrible winter storm off Cape Cod to a massive oil tanker that has split in two. Very dramatic moment by the way, when the sailor sees his own ship cut in half.

If you're looking for a feel good movie for the whole family, this one does its job. With a fairly predicable plot leading toward a happy ending, The Finest Hours still offers suspense and drama and is engaging enough to hold your attention. It is a heartwarming story, promoting the ideals of valor, determination, and sacrifice.

One complaint I have is a lack of character development. Some characters that we see and would like to know more of just float through the story and are somewhat flat such as some of Bernie's friends. The ending is somewhat anti-climatic too as the heroes must face such trial to find the ship, yet hardly struggle getting back except for the cold.


The romance between Bernie and Miriam is very sweet. One of my favorite lines is at the end when Bernie says to Miriam about their wedding, "So is April 16th still good for you?" The cast was well chosen and there were enough sub-plots between those on the oil tanker, Miriam on shore, and Bernie in the coast guard boat to keep you interested.


Some great characters: Sybert is an interesting character as he pulls those remaining on the oil tanker together despite their unwillingness to have his leadership. He uses ingenuity and common sense to keep them alive till a hoped for rescue arrives. Bernie is always "by-the-book," but his most shining moments are when he does what is more heroic in the moment. One great line of Bernie's is "we all live, or we all die." Miriam has a lot of spunk. From proposing to her fiance, to standing up to Cluff, to trying to save Bernie from the shore, Miriam shows her perseverance and strong will.


Overall, there are some really great moments in this film. You'll have to see it for yourself! There is something really great about seeing characters win out against all odds. I think what I loved most about The Finest Hours is that it is true. Disney sets up heroes in this movie that are real and inspiring. Nice touch with photos at the end of the real people. So if you get the chance, see this great movie!