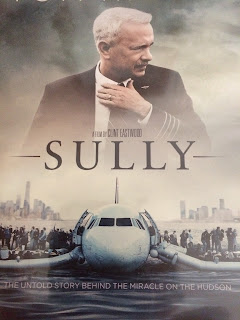 Based on the true events of January 15, 2009 in New York City, Sully is a movie about the heroic moments of the crew on U.S. Airways Flight 1549.

In my opinion, this film was really well done. I remember when this event happened in New York City, but it kind of goes out of your mind after all the news is over. I am really glad someone made this into a major motion picture to capture those heroic moments of Captain Sully and his crew.

One of my thoughts going into the movie was how will they turn a few brief moments in the air into a great film? Well the filmmakers and actors achieved that excellently. I think the most effective means of doing so was splitting those moments into flashbacks of the actual event leading up to the full-blown scene of the plane landing in the Hudson.

I also think the plot was well designed by having different perspectives of the event. From the cockpit, to the passengers, to the bystanders, to the rescuers, to the airport towers, the plane landing was captured from every angle. This was a very well-used plot device, as well as the film's good casting and witty dialogue. They also made the cast look a lot like the real people, which is always a nice thing too.

My favorite character was the First Officer Skiles. He didn't get as much credit as Sully, but his job was equally important, and I liked his clever comments throughout the film. One of the best lines was at the very end of the movie when one of the investigators asks him what he would do differently if he had to go through that plane ride again. Skiles says, "Yes, I would do it in July."

There's something about seeing an event turned into a movie that brings the situation to life if you haven't experienced it. For myself, I appreciate much better the incredible way in which Sully saved all those 155 lives that day in 2009. It is great to see the stories of unsung heroes, who should continually be remembered for their bravery.

I would recommend this film as a tribute to the miracle that happened that day.