The Song of Bernadette 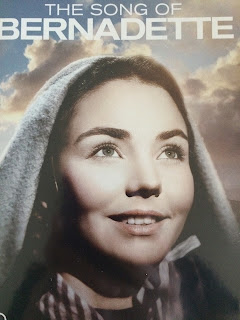 The Song of Bernadette film opens with the line: "For those who believe in God, no explanation is necessary. For those who do not believe in God, no explanation is possible." This 1943 movie gives a stirring presentation of the apparitions and miracles of Lourdes that reflect this statement. With 5,200 cast members and an Academy Award winning lead for "best actress of the year," the efforts to portray the events of 1858 in The Song of Bernadette pay off.

To begin, the movie brings alive the sufferings and poverty of the Soubirous family, who lived in an "old jail" that was not even fit for prisoners. Early in the film we are introduced to Bernadette's humility and generosity despite her poor health. It doesn't take long for the movie to jump right into the heart of the story, that is, the visions the saint had of Our Lady. For a fortnight, Mary would appear to Bernadette, calling for penance and the praying of the rosary.

One also witnesses the political resistance and general opposition to Bernadette's faith, alongside the acceptance and belief of thousands of the faithful. With the growing miracles of the spring water of the grotto, even the doctors have to admit something unexplainable by earthly means is taking place. Viewers are gratified especially when her parish priest, Peyramale, eventually rallies to her side in so many instances. A particularly good scene is with the Bishop of Tarbes who says: "The Commission (to look into Bernadette's apparitions) can render only one of three decisions. First, 'you're an impostor little Soubirous. Away with you to a home of juvenile delinquents'. Second: 'you're a madwoman little Soubirous. Away with you to an asylum.' Third: . . ." Peyramale cuts in: "You are the rarest of mortal beings, little Soubirous."

When Bernadette shares the name of her Lady as the "Immaculate Conception," debate ensues among the clergy. When one of the priests says he thinks the Lady made some kind of blunder, Bernadette says she will let her know that. Bernadette's simplicity and sincerity render most objectors speechless. She manages to win over many hard-hearted souls through her piety, as well as her conviction in the Lady's messages. Her heroic acceptance of sufferings, especially toward the end of her life in the convent, would inspire anyone to bear all for the love of Christ.

One can hardly appreciate the beauty of the saint's life only by seeing this film or reading books about her, but they do aid in the visualization of the deep wealth of her virtues and gifts. I highly recommend this film to anyone who wishes to revisit such a beautiful event in history as Our Lady appearing at Lourdes.