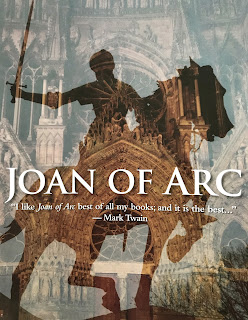 Mark Twain's words about this work say it all: "I like Joan of Arc best of all my books; and it is the best; I know it perfectly well. And besides, it furnished me seven times the pleasure afforded me by any of the others; twelve years of preparation and two years of writing. The others needed no preparation and got none." I agree with his statement, "it is the best." I've read this book twice and never get tired of it. Perhaps I'm biased because Joan of Arc is one of my favorite saints, but Twain really brings her story to life. He portrayed the narration as Louis de Conte so remarkably that many at the time didn't know Twain was the author.

This post will be pages and pages if I really told you all the great things about this book, but you will have to read it for yourself. In short, the work is divided into three parts. The first "In Domremy" and the life with her family. The second "In Court and Camp" and her epic battles. The third "Trial and Martyrdom" which Twain puts as "among all the multitude of biographies that freight the shelves of the world's libraries, this is the only one whose validity is confirmed to us by oath."

The third section is perhaps the most moving. There is nothing compared to the dialogue of Joan of Arc at the end of her life, including perhaps the most famous line, "if I be not in a state of grace, I pray God place me in it; if I be in it, I pray God keep me so." Also, her answer to the question of why her standard had been at the king's coronation: "it had borne the burden, it had earned the honor."

I think what moves me most about Joan's life is her willingness to serve God in whatever way He wished and the remarkable courage and fidelity to the mission He gave her. It is a wonder to me that discovering the rich spiritual depth of a soul like Joan of Arc that Twain never became a Catholic. Still, he does great justice to the life of the Maid and shows what a hero she really was. (Note: the film of Joan of Arc with Ingrid Bergman is not bad and follows along fairly accurately with her story as well).