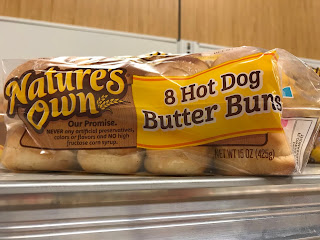 Have you ever seen Father of the Bride with Steve Martin? A true classic in my book. If so, you will recall well this scene when George is overwhelmed by all the wedding preparations, turning his house into a place for the ceremony, and above all "losing" his daughter to her new husband, and can't take one more frustration like not having the right amount of hot dog buns in the grocery store.

George: "I want to buy eight hot dogs and eight hot dog buns to go with them. But no one sells eight hot dog buns. They only sell twelve hot dog buns. So I end up paying for four buns I don't need. So I am removing the superfluous buns. . . . Some big shot over at the weiner company got together with some big shot over at the bun company and decided to rip off the American public because they think the American public is a bunch of trusting nitwits who pay for things they don't need rather than make a stink. Well they're not ripping off this nitwit anymore because I'm not paying for one more thing I don't need. George Banks is saying no! {Grocer: Why don't we just calm down now sir?} I'll tell you why we don't calm down, because you're not excited. It takes two people for a we to calm down, doesn't it?"

Overwhelm literally means to "drown or bury beneath a huge mass, feeling a strong emotional effect from an event, or to defeat completely." I often wonder why the smallest things in life seem to be the ones that upset us the most, but when you think about the fact if you are overwhelmed and you can't go lower than being "defeated completely" the smallest of frustrations can quite simply be too much.

I think the answer to this question can be found in George Banks realization of hitting a low point when ending up in jail for splitting open the hot dog packages in the grocery store. It is ALL about perspective and taking a step back. Separate in your mind what is important and what is not and let some things drop off. Remember what you want to value in this moment when you look back on it at the end of the year. Find quiet moments for gratitude and a lifting of your heart to God. And above all . . . breathe. By the way it's nice to know they now sell hot dog buns in quantities of eight ;-)