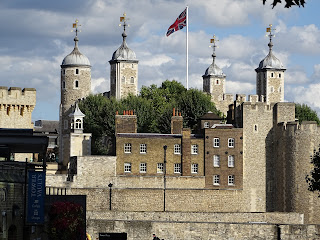 Msgr. Robert Hugh Benson is the author of many notable Catholic novels, many of which I would love to cross off my list of read books. I personally have only read two of his English martyrs novels, By What Authority and more recently Come Rack, Come Rope. Both were very inspiring and historically accurate.

Come Rack, Come Rope, are words taken from Edmund Campion, who after being tortured in the Tower of London reaffirmed he had not revealed any secrets that would compromise the Faith, "come rack, come rope." As written in the preface, the novel could more rightly be called non-fiction, rather than fiction, save for the two main characters. The events center around the sufferings of Catholics under Elizabeth's reign in the late 1500's, when it became high treason to be a priest in England.

The story follows the characters of Marjorie and Robin who are Catholics in love. However when Robin's father apostatizes, Robin is presented with a new inspiration to pursue the priesthood rather than marry Marjorie, which he well knows may mean eventual death. Edmund Campion makes an appearance in the novel as well as Nicholas Owen, the priest hide creator and Richard Topcliffe the infamous torturer. The plot realistically captures the stealth, courage, and heroism of the priests who risked their lives to provide the Sacraments.

This novel reminded me of the great love and appreciation we should have for the Mass. It is sobering fact that Catholics risked their lives to attend Mass in those times, and this is a privilege offered to us daily at no inconvenience to ourselves other than our time. We should long to be present at the Holy Sacrifice to receive Him Who comes down from Heaven for us. At the end of the novel, Heaven is described as that place where "the Crucified Lamb of God would talk to him as a man talks with his friend." Let us here on earth talk to Christ as our dearest Friend.