Life After the Convent 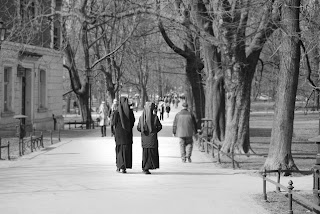 This is a topic I have considered writing a whole book about for the last couple years, because I don't think that there are enough resources out there about this. This week we celebrate the feast of St Agnes (actually twice), which inspired this post as my religious name was Sr Mary Agnes. I put together a few thoughts for those who have experienced having to leave a convent in the hopes that readers understand what a challenging reality it is. I do have to say, I am no expert on this so take what I say with a grain of salt . . . and if you are looking for a good book to read, I highly recommend A Call to a Deeper Love (letters of Sts. Louis and Zelie Martin). This book changed my whole view of what vocation means.

5 Pieces of Advice I Received and Want to Pass On:

1. (From my old superior) "The extraordinary thing about discerning a vocation is that some girls are called to pass through the convent, but do not have a lifelong vocation." They were meant to touch those religious Sisters' lives and vice versa, and they needed something special from their convent experience to take with them into their beautiful lives in the world. Our lives are a journey and contribute to the person we are. You needed a grace you received in the monastery and wouldn't be the same without it.

2. (From a good priest friend) "God does not use a parked car with discernment." It may seem like after leaving the convent, you have no idea where you belong and are "stuck." But God is driving your car even if you don't feel like it. You are moving forward. God is working. It won't always feel like you are going through an identity crisis. Try to reintroduce something that was special to you before religious life, and enjoy finding who you are in the world now! It's like getting to paint a new canvas . . . and let me tell you it will be absolutely amazing what you do with it.

3. (From my old caretakers at the monastery) "The sacrifice of leaving a convent is ten times harder than getting to stay and live that life." Think of all the souls you have saved and are saving by that offering you had to make. You can never know the extent of the influence this trial has for the salvation of souls. You may feel like you failed, but it is the exact opposite. You have triumphed and done something most people will never have the courage to do . . . you have the courage to dream another possibility for your life and walk the hard road ahead with your head held high.

4. (From my old novice mistress) "The habit does not make the monk." I was told upon leaving that there are much holier people in the world, even than in the convent because your state of life does not define you. God looks at our hearts and our union with Him. Period. Will you end up in one stable vocation ultimately? Yes of course. The point is however that that is not how God sees your soul. He sees the sacrifices you make, the love you show, the courage you possess, the virtues you practice, the beautiful personality you have that makes you uniquely YOU!

5. (From another convent I tried to enter) "Open your heart to marriage." This may be the hardest one to accept, so be patient with yourself. But consider saints like Louis and Zelie Martin and the family of saints they raised like Therese. One pope's mother said he could never have his papal ring if not for the wedding ring she wore. Your marriage will be so much more spiritual and meaningful because of your convent experiences. For after all, marriage is a vocation, a calling from God, and He calls you to marry a particular person, for both of you to work together to get to Heaven.

I know a beautiful love story of high school sweethearts who decided to break up to try being a Carmelite nun and Carmelite monk.  After a period of discernment, the girl left the convent first, realizing she wasn't called to religious life. When the guy found out she had left and might pursue a relationship with another guy, he realized very quickly he didn't have a vocation to religious life either. ;-) The two reconnected and are now married with a lovely family!

Now above all pray, pray for God to show you His will. I have known several people who went to a second convent after their first try and are still there, so even though you are in between, do not give up hope you could still have a religious vocation! But if you don't, it is because God has something more wonderful planned for you than you could ever imagine. Don't ever doubt that because the bottom line is where you find the most peace and joy is where God is calling you.