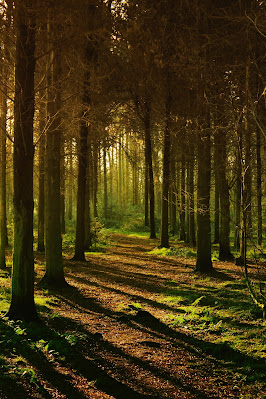 She stood looking at all three of them. One was twisted and she couldn't see beyond the hanging trees where it would lead. The one in front of her was wide and and flat and had gravel sprinkled along. The third one was all downhill and and uphill and narrow.

She wished she could try them all. They were all open to her. Wouldn't it be nice if the sun just lit one path up and pointed it out so to speak? That would make it simpler. Yet herein was the dilemma. There was a choice and there was no wrong answer. They all drew her for one reason or another and she desperately wanted to find out where each one would go.

There was a slight hesitation, but then she took the path to the left and followed the twists and turns. There was an uncertainty to it, filled with roots along the path, branches sticking into the road, and sounds of animals nearby. At the same time, she could see the light peeking through the trees, spilling over the leaves with myriads of shadows dancing along.

Suddenly she found herself at a crossroads. It was the same crossroads, but different because she was different. There was the path she was on, that continued with the twists and turns, the wide open path in the middle, and the one to the right with the hills. Again, she was given a choice.

This time she took the road in the middle. It had a vista to the open sky, a sky filled with puffy white clouds, and the quiet crunch of the gravel beneath her feet. It was less tricky than the one with the twists and turns, but had its own challenges with the beating sun pouring down from above. It took her less time, but there was a breeze that sort of pushed her along the woods.

For the third time, she discovered a fork in the road. The three paths presented themselves again. It took her longer to decide because she wasn't inclined to take the hilly one just yet. She waited, waited for a sign that she would have what it took to go down that road.

A bunny took off down the hill. If a bunny can?

She took the third road. It was the hardest of the three. She knew it would be, but she also knew it might, just might be the most beautiful so far. She hiked and hiked and hiked, until . . .

It was the rainbow amidst the rushing stream which stole across the landscape that caught her attention. There was a rock along the edge that she sat on. In that moment, it was all she could do just to take it all in, contemplate the beauty.

A beauty that would have been lost had she not taken that path.