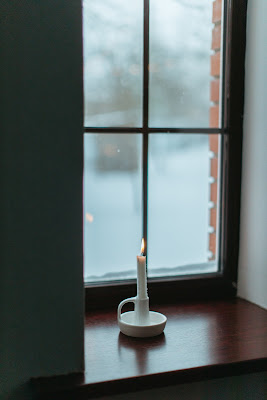 It never knew what it was missing until it was lit.

The first burst of flame was a sensation it had never known. Finally it could give itself - let itself be consumed by an exhilarating fire. The wax dripped down and the wick was really catching on now. It was a flame that any candle could have, yet without this one candle - that particular light would not shine in the darkness.

It stood tall - that candle - but it knew that soon enough, it would stand short - if it could be called that - for standing short meant that it had to lose a bit of its high and might stature. It was worth it for the ability to carry that flame above itself - for isn't it interesting that the flame is always on top?

Things do not burn up, but burn down in order that the candle never forgets its purpose - to be small - and let the light be the focus. Even in the dying embers, the candle does not give up its light until it is finally exhausted of everything it had to offer.

It is a vessel for that fire and when it goes out, it is in a sense "breathing its last" but it fulfilled its purpose, which was to be a channel, an instrument, for - warmth, light, life - as the fire will take all.

It cost the candle everything.