What is Consecrated Virginity? 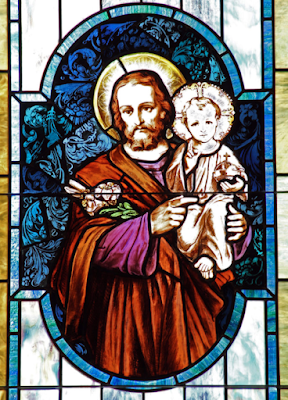 On the feast of St. Joseph, who is called the Guardian of Virgins, I thought I would take the opportunity to write about a little known vocation in the Church, which is the call to consecrated virginity. One of the most common questions is, why not religious life, or is this also a form of religious life? To understand consecrated virginity it is good to look at the distinct nature of this vocation both as it is similar and different from other forms of consecrated life.

My philosophy professor in college always used the term the "whatness" of a thing, meaning the essence or what makes a thing what it is. Religious life is a call to be a spouse of Christ through religious vows. She professes the evangelical counsels of poverty, chastity, and obedience. She is actively vowing herself to God for the sake of His Church.

A consecrated virgin is called to be a spouse of Christ, but through consecration. The local bishop prays the rite of consecration over the virgin, who passively (meaning in a spirit of surrender) receives the blessing and is thus consecrated (or set apart) for God. She is actively receiving the consecration from the Church in the person of the bishop, but she does not make a vow...she makes a promise of perpetual virginity by the nature of this consecration for the sake of His Church. She is commissioned to pray the liturgy of the hours, like a religious sister, but this is often prayed privately rather than communally.

How It is Lived

Another essential element is the living out of the call to consecrated life. A religious sister is called to a particular community with a distinct charism, which is lived under a specific horarium. She is called to live the common life with other religious sisters who profess the same spirituality....which is normally founded by a saintly individual and under a specific Rule, such as the Sisters of Life who serve mothers and the unborn.

A consecrated virgin is also called to community (or communion with God through others), but it is lived out individually. Each consecrated virgin shares the call to virginity (or spousal union with Christ, a distinctly bridal nature), but she serves God through the community she finds herself in. She is not in a formal community in the strict sense, but "follows the Lamb wherever He goes" which may be in the role of a caregiver for elderly parents, a teacher serving her students, or a canon lawyer for the diocese....it is a call to bring Christ's light to the world in a particular local church or diocese.

Where It is Lived

A religious sister may have known what charism she felt called to from a young age, and enters a community for life (after a period of formation). Although she may think she may remain in that same community her entire life, she may discover a call to go on a foundation. She could end up anywhere in the country (or the world for that matter). On the flip side of that, it may have taken may visits and many long discernments to find the right charism and community and the call may take the young woman far from her home diocese.

Consecrated virginity is very different from this. It is a call to the local church, or to a particular diocese, often her home diocese. She is called to serve the Church in the capacity of her natural talents and God-given gifts by remaining in a particular diocese, in complementarity of the diocesan priesthood. She may transfer to another diocese, but it should be for a significant reason and prompted by a solid discernment. She will, however, always have a special bond to her consecrating bishop and the priests of the diocese where she was consecrated.

Who Can Live It

A religious sister can enter her community at the age of eighteen, in most places, and there is no necessary prior formation before joining an Order. This is normally given within the context of the vocation after becoming a Sister. Also, she could have been married and her spouse dies and she can enter religion, or she may have repented from an unchaste life and still make a vow of chastity and live a life of Sister. Good physical health is usually a requirement for most communities in order to share in the common life.

On the other hand, when discerning a call to consecrated virginity, the diocese often looks to see if the candidate has the necessary maturity and foundation in discernment. She normally cannot be consecrated before the age of twenty-five and must show financial stability as the diocese is not responsible for her material welfare. A certain level of psychological health and maturity is necessary, but physical health, to my knowledge, is not a strict requirement, as long as the capacity to live the call to spousal union with Christ is present. Also, she must never have been married and not lived in open violation of chastity, such as cohabitation, as she is being consecrated as a virgin.

A young woman discerning a call to religious life will often desire to live this out in community. She would have a strong attraction to a particular community and charism and when she finds the right Order it will feel like "coming home." She wants to give her life exclusively and entirely to Christ through the profession of vows and with the distinct horarium, charism, and religious habit of the community, while also perhaps with a great love of the founding saints of the Order to the degree where she feels she could not serve God in any other way but through this apostolate.

A virgin discerning a call to consecrated virginity has a strong desire to live in spousal union with Our Lord but is content with both solitude and times of community life that vary and present themselves to her in the world. She does not leave the world, but remains in it not "of it." She lives the evangelical counsels in a way that is discerned with her bishop and spiritual director, but she does not profess them as vows. She lives in perpetual virginity for the sake of the Kingdom and desires to receive consecration, imitating Our Lady at the Incarnation who received the message of the angel and was a faithful daughter of the Father became the Mother of the Son and the Spouse of the Holy Spirit.

Both religious life and consecrated virginity complement each other as forms of consecrated life offered by Holy Mother Church, but they are distinct. Both are ways of exclusive spousal union with Christ and means of growth in holiness. They share the common mission of serving the Church, but it is lived out differently. A young woman in discernment has two beautiful options before her...she has only to take the plunge and give her life to Christ in the way of life where she can best give Him glory and save souls.