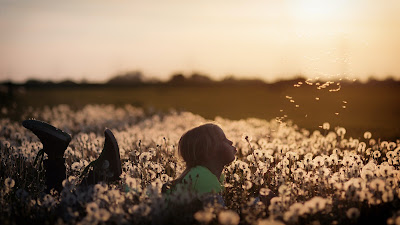 "Some see weeds, others see wishes."

I saw the wishes, as the seeds were blown off the stem by the wind, scattering about the world - there was a mystery about it. Where did they land? Who would see them? Would they one day become a flower?

Seeds, carried by the Holy Spirit, taken all across the world to be planted in souls. But I had to be the one to pick the dandelion and believe the seeds were wishes.

If I saw them as weeds, they would not have an effect. The wind (grace) was the force behind the seeds (prayers), and God carries them where they are needed. I realized in giving the seeds to the wind, I may never see where they land, but holding the dandelion to myself would be like hoarding wishes.

Worse still would be to pass by the dandelion altogether. It was not really how hard I blew either - it took but a breath, but I wanted to keep blowing until the last little seed let go of the stem. That takes time. Yet its just a moment of a passing day, my life.

Then in the springtime beauty of a field of wildflowers, I wondered who had the courage to blow the seeds that I now saw as flowers. They were the fruit of someone's prayers--how splendid that is to know how connected I was to all of those souls. I may never know who planted them, but in seeing them I knew for myself I never wanted to lose the opportunity to spread wishes.