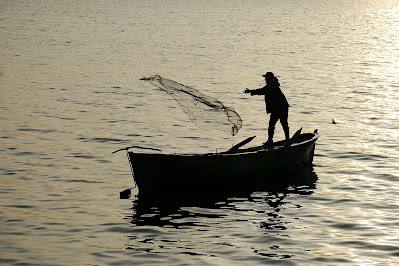 "We weren't supposed to be there, but we were." Sounds like a chapter title. I wonder how often our misdirected plans turn out to be the means for God guiding us toward a better path. It may not seem or feel like that at the time. That's when we must drop the net yet again.

In the call of Peter, you can see the initial reluctance and hesitation and doubt in casting the net out to sea after a fruitless night of fishing. When we have tried and tried to work through something or pursue a particular road and it's just not working or going anywhere, that is when Our Lord is asking us to drop our net...again...casting into the deep. Peter was given the most amazing catch of his life, but when he received that--he left it. He wanted Our Lord, to follow Him.

We might feel that uncertainty in casting the net too, but the merit is in dropping it. It is Peter's willingness to trust in His Word that brings about the miraculous catch. Peter had to say yes. Our Lord was not going to bring about the miracle, unless Peter let down his net. Our Lord invited him to more, through that act of surrender, and then Peter is given the mission to catch souls because of his humility.

What would happen if you dropped the net again in your life? Maybe it's the eleventh hour for you, but Our Lord is still waiting. Don't miss His call.