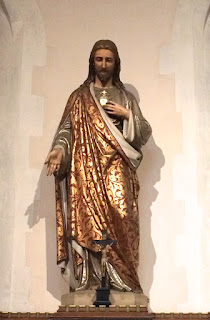 "Oh Jesus, meek and humble of heart, make my heart like unto Thine." Yesterday we celebrated the feast of the Sacred Heart of Jesus and this is such a beautiful and fitting prayer for this glorious day. I thought for this blog post I would just share the amazing promises that Our Lord gave to St. Margaret Mary for all those who will honor His Sacred Heart.

1. I will give them all the graces necessary for their state in life.
2. I will establish peace in their families.
3. I will comfort them in their trials.
4. I will be their secure refuge during life, and, above all, in death.
5. I will shed abundant blessings on all their undertakings.
6. Sinners will find in My Heart an infinite ocean of mercy.
7. Lukewarm souls will become fervent.
8. Fervent souls will rapidly grow in holiness and perfection.
9. I will bless every place where an image of My Heart shall be exposed and honored.
10. I will give to priests the gift of touching the most hardened hearts.
11. The names of those who promote this devotion will be written in My Heart, never to be blotted out.
12. I promise thee, in the excessive mercy of My Heart, that My all-powerful love will grant to all those who receive Holy Communion on the First Friday of nine consecutive months, the grace of final penitence; they shall not die in My disgrace nor without receiving their Sacraments; My Divine Heart shall be their safe refuge in this last moment.

One way to honor Him is by having an image exposed in our homes of the Sacred Heart, or perhaps praying the Litany of the Sacred Heart, or even better spending time in adoration before His Eucharistic Heart. Let us not lose a single opportunity to turn our hearts to Our Lord's and ever more be united to Him.
Posted by Therese J. Roberts at 4:10 PM No comments:

Email ThisBlogThis!Share to TwitterShare to FacebookShare to Pinterest
Labels: Devotions 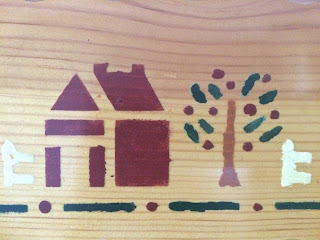 Not long ago, I wrote a post about the travel bug. That is definitely a common symptom that pops up in our lives, and a healthy dose of "seeing the world" is certainly great. This week, however, I want to write about home.

What does home mean to someone? A place you retire to when not at work? A place where your family lives? A place where you feel loved and secure? I think in a general sense "home" fits all of these definitions. To me, no matter where you travel or how long or short you are gone, there is nothing like that feeling of arriving at your "home sweet home." For unless you are a true nomad or your living conditions are less than ideal, there will always be somewhere special to which you return.

The word home seems to resonate a sense of peace. That in that place is somewhere you can find joy, comfort, security, love . . . all intangibles that reflect God, meaning He should be the center of the home. I like that phrase: "Christ is the Head of this house, the unseen Guest at every meal, the silent Listener to every conversation."

Since the state of one's physical home can vary, it presents us with the idea that earth is not our final home. We are always traveling as pilgrims to our permanent abode in Heaven. It is a nice thought, is it not? To think of the concept of eternity. Home with all its ups and downs reminds us of this. When home is a place that brings contentment, we want to hold onto that forever. When home brings misunderstandings and frustrations, we want to escape from it. Meaning we all long for that place--for Heaven--where there is no suffering and our peace knows no bounds.

We should thank God every day for our home--somewhere that we have worked for and built up by all our efforts to create a place that you can sit by the hearth and breath a sigh of relief at the end of a long day.
Posted by Therese J. Roberts at 1:03 PM No comments:

The Amanda Case Files No. 2

Amanda Case returns for an all new exciting mystery! Jump start your summer vacation with a lighthearted and wholesome fiction novel. From the back cover: "Amanda Case is back for a new mystery that starts out personal. When Christie Henley is arrested for murder at Fielding's Hospital, Liz must discover who would frame her sister and why. Liz sleuths undercover to unveil a motive among doctors, nurses, CEO's, and a janitor. Will Liz find the killer in a plot that gets deeper and deeper? And how will she handle a very unexpected family secret that surfaces during her investigation?"

Here's a sneak peek of the novel! And you can look forward to the third installment for Christmas!

Happy Reading!
Posted by Therese J. Roberts at 11:53 AM No comments: 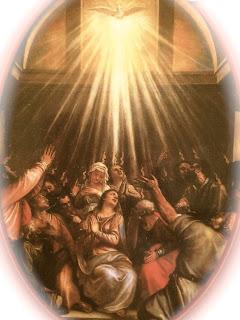 Novenas remind us to persevere in prayer. Arranged for nine consecutive days, novenas either pray the same prayer each day or have a different prayer depending on the particular devotion. The first novena of the Church was at Pentecost as Our Lady and the Apostles awaited the coming of the Holy Ghost. Novenas teach us to be patient because God wants us to keep asking for His grace and aid.

Particularly at Pentecost we remember the fruits and gifts of the Holy Ghost, but we should be praying for these every day. A quick list: Gifts ~ wisdom, understanding, knowledge, counsel, fortitude, piety, and fear of the Lord. Fruits ~ charity, joy, peace, patience, long-suffering, goodness, benignity, meekness, fidelity, modesty, contingency, and chastity.

A great saint who truly understood the reality of the presence of the Holy Ghost in our souls when in the state of grace was St. Elizabeth of the Trinity. Her message centered around the divine indwelling. Some great quotes of hers are: "It seems to me that I have found my heaven on earth because my heaven is Thee, my God, and Thou art in my soul. Thou in me and I in Thee, may this be my motto." And again, "What a joyous mystery is Thy presence within me, in that intimate sanctuary of my soul where I can always find Thee, even when I do not feel Thy presence. Of what importance is feeling? Perhaps Thou art all the closer when I feel Thee less." And finally, "May my life be a continual prayer, a long act of love."

There are no words that adequately describe the immense gift of the life of God in the soul. It is a great subject for prayer to dwell on the mystery of God's presence within us. We should make efforts throughout the day and every moment to converse with so great a Guest.